Dr. Mark Sloan (Dick Van Dyke) helps the police solve unusual murders. Mark tries to prove that a TV host has murdered a radio presenter by electrocuting him in his shower.

Dick Van Dyke stars as Dr. Mark Sloan, a dedicated doctor who dabbles in detective work. Mark investigates the murder of a wealthy bigamist who was poisoned and fell into the sea.

Matlock gets involved when a photographer is accused of the murder of an overbearing modelling agency president, who also happen to be the boss of Conrads supermodel girlfriend.

When a worthless movie contract drives a glamour girl into hiding, Perry is asked to find her and finds himself dealing with a romantic triangle - and murder.

Chuck Norris fights crime and helps the community as the eponymous Walker. The Rangers try to bring a halt to the black market trade of African conflict diamonds for illegal weaponry.

When a woman falls from the pavement and is run over by a bus, it seems like an open-and-shut case. That is, until a hand-shaped bruise is found on her back.

Gibbs and company investigate the murder of a member of the US Navy; EJ has investigated three previous similar deaths, so Vance gives her the lead.

Two Sudanese informants are on their way to give a deposition when the car they are being escorted in is attacked by an unknown assailant. Callen and the team investigate.

A biker who was hired to provide security for an arrogant movie star, in turn hires Ben when hes accused of killing the actor.

When a young ex-con is accused of robbery and murder by the entire town, Perry changes his plans for a fishing holiday and defends him instead.

Paiges maternal side goes into high gear when Team Scorpion must save an unconscious, hypothermic boy stuck in the wheel well of their airborne plane.

Chuck Norris is Walker in this modern, high-kicking martial arts western. Walker and Alex make preparations for the arrival of their baby. Meanwhile, the Rangers end up on a movie set...

When a Navy Lieutenant is murdered on his way to a meeting with the President, the team look into whether his death was connected to a series of recent muggings - or something far worse.

A violent raid on an armoured truck just outside LAX leads Callen and the team on a hunt for a mysterious wooden crate. G and Sam celebrate five years of service together.

Team Scorpion heads to Northeast Africa where they must carefully navigate a minefield in order to save the lives of local villagers.

A body is found at a prestigious Miami golf course after a group of teenagers held a flash mob there. Horatio follows the clues to a famous local attorney.

When a Navy Lieutenant is murdered on his way to a meeting with the President, the team look into whether his death was connected to a series of recent muggings - or something far worse.

Team Scorpion heads to Northeast Africa where they must carefully navigate a minefield in order to save the lives of local villagers. 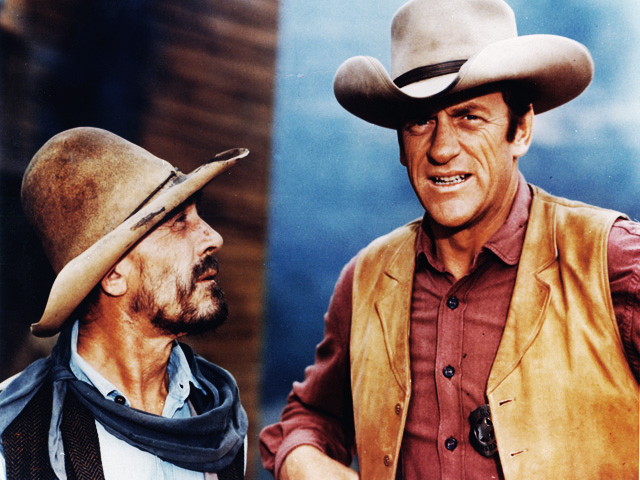 Classic Western series based in the tough town of Dodge City. A reformed safe cracker tries to start a new life with an aging saloon girl.

Classic Western series based in the tough town of Dodge City, where Marshal Matt Dillon keeps the peace. Marshal Luke Rumbaugh (Jim Davis) teams up with Marshal Dillon tame the town of Hilt.

The team finds inspiration from Poes The Purloined Letter in their plan to rescue a resistance fighter, and sow discord among the leaders of the military junta hunting him.